While I walked through Holy Week, considering the cross and Christ’s sacrifice, I was also reading The Hunger Games.  With the recent cinematic splash of the movie version, I figured I better get up to speed and dove into the first book (I’m hooked so I’m reading through the whole trilogy).

As I finished it in the early days of Holy Week, I was struck by how current all the basic theological concepts of the cross of Christ remain.  It’s not unusual to hear critiques of the theology surrounding the cross, how concepts like sacrifice, propitiation, atonement are relics in our guilt-free culture.  And while there’s not a prayer to be heard or a single reference to any deity, The Hunger Games provides a disturbingly relevant exploration of this rich Christian theology.

The Hunger Games pictures a dystopian North American future where a privileged class (the Capitol) oppresses and subjugates “the districts” after a rebellion.  As President Snow reminds, “It was decreed that each year, the 12 districts of Panem should offer up a tribute of one young man and woman between the ages of 12 and 18 to be trained in the art of survival and to be prepared to fight to the death.”  Children are offered up to the empire and this whole spectacle of violence is broadcast for the entertainment of the Capitol citizens while all the districts are forced to watch in horror.

Author Suzanne Collins picks up antecedent threads of human history (the “bread and circuses” of ancient Rome), literary works (the Greek myth Theseus, Shirley Jackson’s The Lottery) and current culture (The Truman Show and most reality TV), weaving it all into a narrative rich with theological themes. All the tributes in The Hunger Games are scapegoats, atoning for the sins of a past rebellion.  Within the brutality of the games, we see the obvious juxtaposition of those living for self-preservation or self-amusement and those sacrificing themselves for others.  Katniss Everdeen volunteers for her sister who’s name is first chosen in the reaping.  She substitutes herself, laying down her life in her sister’s place.  Another character, Peeta, suffers sacrificially, absorbing an attack to protect Katniss. 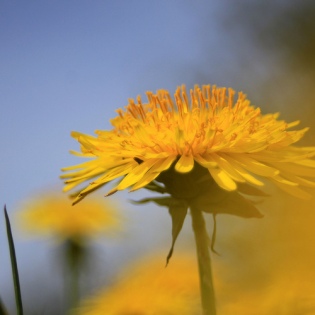 It’s a compelling read showing our easy default towards scapegoating violence no matter how sophisticated we become; its a prophetic critique of our society, amusing ourselves with violence at the cost of others, our propensity to live sated lives at the expense of impoverished people around the world; and it’s a disturbingly relevant echo of the need for divine atonement, our desperate need for a sacrificial love to undo evil, end violence and change the world.

It was surprisingly helpful Holy Week preparation to freshly appreciate the sacrifice of Christ on the cross, God’s common grace given to better savour his saving grace.

7 thoughts on “The Hunger Games in Holy Week”