A saint is one who exaggerates what the world neglects. G. K. Chesterton

No, Virginia, that paunchy, red-suited, white-bearded stranger who breaks into people’s houses once a year is not real – he’s an imposter, a sham and serves as 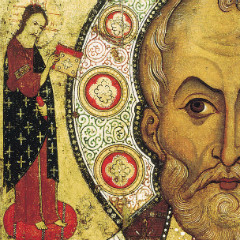 the front-man for the consumer empire we live in.

But yes, Virginia, Saint Nicholas is real – the real deal and tomorrow, December 6, is his day.  I know, it’s not Christmas – and that’s the whole purpose.  The Feast of St. Nicholas is perfectly timed to get us in a generous, Jesus way of being, giving us the space and time to focus in on the gift of Jesus at Christmas.

And even if he wasn’t true, you should want him to be.  Think of the differences between these two polar opposites:

Yeah, I hear you – “but he’s a saint, a mythical, air-brushed image of perfection that you could never be even if you tried really hard.”  And sure, there’s some legend that’s grown around Saint Nicholas.  But let’s think for a bit about saints.

Popularly understood, a saint is a spiritual superhero who has lived a life of uninterrupted virtue.  But the bible and church history point other ways, showing us that a saint is one whose life is a virtuoso display of God’s grace in a sometimes muddied and muddled life.

The genius of ordinary joe’s like Nicholas lies not in their unattainable virtue or heroic devotion but a grace that is available to all of us.  As poet Margaret Avison writes: “The best / must be, on earth / only the worst in course of / being transfigured.”

Saints like Nicholas are a witness to the truth, they are, as Kathleen Norris writes, “Christian theology torn from the page and brought to life.”   They offer you and me a fresh display of what this Jesus life looks like in everyday living. 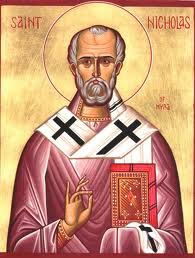 And they give us a needed jolt to our culturally blunted awareness of holiness and grace.  In our “shopacalyptic” consumer world, Saint Nicholas offers a sharp prick of Kingdom reality to our understanding of a gospel life.

So, Virginia, tomorrow, mark the day and celebrate the real deal – St. Nicholas, the saint, the dude, this ordinary guy.

And let me help you get into a St. Nick state of mind: before you head out tomorrow, grab a fistful of loonies and twoonies ($1 and $2 coins) and give them away to anyone (I mean anyone) who asks.  Stash a few extra bills in your wallet or purse for the sole purpose of giving them away to help someone in need that day.  Do something kind for another person; sponsor a child (http://www.causekids.ca/ or https://children.worldvision.ca/sponsorship/Forms/Child.aspx?service=page/Child&lang=en&type=A&mc=3335304); call up that lonely person and just listen; get informed on the reality of human trafficking; find out what IJM is doing about women sold into sexual slavery; buy some groceries for the homeless guy; encourage someone – and do it all secretly.  But mostly, have your heart broken for all things God’s is.

And one more thing – a life of justice and compassion feeds and is sustained on God’s goodness, so treat yourself to a chocolate or two as a reminder of that  (a good tradition my Dutch tribe celebrates on Sinterklaas).

2 thoughts on “A saint, a dude and an ordinary joe”